As one of the younger grandchildren, Paul’s memories of Grandma Millie are somewhat different than those of older cousins like Susan Snyder Hurley. That would make sense given that Paul is eighteen years younger than Susan. All of his memories are of the two houses where she lived in Mansfield (see pictures below). 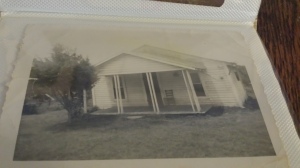 “One of my fonder memories would be the gathering of brothers and sisters when available at Millie’s house in Mansfield for ‘Sunday dinner.'”

“As children, my sister Joan and I would always watch for landmarks on the way in the car. The ‘stair steps’ at the hill in Jenny Lind I believe were one landmark. At Huntington, I think was the big long hill that curved around down to Mansfield. To us these seemed familiar after making the trek from many places in Arkansas but at least after the early 1970’s from the Fort Smith area.”

“Grandma would always have a pot of pinto beans which would have been soaked overnight for a really rich taste that I wish I could replicate. The adults would all be at dining table and us kids I guess sat on the wood bench or porch railing and ate.”

“The frosted glass front door window has always been a fond memory.”

“Going to the corner store to get hand cut bologna and hand cut cheese of rind were special trips when grandma needed more for lunch, I think it was owned by the Martin who had the funeral home.” 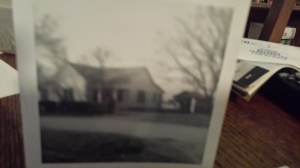 “Grandma’s memory room where we would sleep had birthday and other cards that seem to wallpaper the wall. Many years later Joan and I went with Uncle MC to check on the house before it was sold. It was strange seeing that same room empty except for a corner shelf in wall that Uncle MC let us have.”

“I think part of the reason that I have memories of all the Cartwright family history is that because it seemed like we had family gatherings at Grandma’s house more than once a year that drew members of the family back to Mansfield.”

“Another memory was the metal push lawnmower that younger cousins would compete with one another to use to cut parts of Grandma’s yard.” 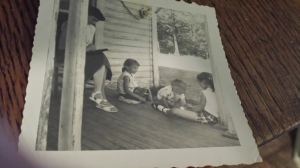 “On a different slant, I also have some memories of the way Grandma administered discipline. When she got angry at us for getting into squabbles outside she would line us up, and each would get ‘switching’ with a willow switch.  As I recall that usually cured us of acting up anymore for that trip.”

I am a member of the senior administrative team at the University of Indianapolis where I have served since 1996. I am married to Mary Wilder Cartwright. We are the parents of four children: Hannah, Erin, James, and Bethany. I currently live in Nashville, IN.
View all posts by mcartwright1957 →
This entry was posted in Conversations and tagged Millie Starr Cartwright, Paul Cartwright, Susan Snyder Hurley. Bookmark the permalink.