A few years ago, I discovered that Jess Cartwright’s great grandmother was the child of immigrants from England. Her name was Eliza Hope Danes Cartwright.

The child of a silversmith, Eliza and her family won the land lottery in Western Georgia in 1826. Her father died shortly after they homesteaded the property in _________ county, GA. Eliza’s mother Ann Mason remarried a few years later and moved to Carroll County, GA. The person that she married was a Methodist circuit-rider. David Stripling was his name.

According to court records available in Carroll County, Georgia, “the persons and property” of Eliza and her mother Ann Butler were placed under the guardianship of David and James Stripling in 1838 with a specified bond of $400. (One wonders whether Ann was ill and not able to care for her daughters. Perhaps they were indigent.)

At the time, Eliza would have been about 15 years old. According to records of Butts County, Georgia, David Stripling (1806-1882) had earlier married Ann Butler (1803-1876) in 1828. There are no extant photographs of Ann and David, but there is a very striking grave located outside Carrollton, GA in the cemetery of Smyrna Church. And because David Stripling was such a beloved figure, we have been able to locate more information about the life of Eliza Hope Danes Cartwright.

In the 1938 pamphlet History of Shiloh Camp Meeting by J. A. Robertson, there is a story about “Uncle” Dave Stripling, “a local Carroll County minister, who perhaps did more preaching and got less money for it than any other man in Georgia.” Robertson recounts that Stripling “was a farmer and plowed his fields as diligently as any man. Often, however, he was called upon to serve churches, and even circuits which were without a pastor. All this he did cheerfully and uncomplainingly. Moreover, he was a tenter at Shiloh and bore his pro rata share of the expense of the camp meeting. . .[Uncle Dave] often said that if it was the Lord’s will he would as soon die at Shiloh as not. His wish . . . came true. It was on Sunday morning. The Presiding Elder asked ‘Uncle’ Dave to preach to the large congregation assembled for the eight o’clock service. He did just that. His clear, symmetrical voice rang out over the campus as few others might do. It was a telling discourse. Suddenly, he ceased to speak, and turning to the ministers behind him he said: ‘Brethren, I am sick. Will some of you conclude the service?’ Two strong men came forward to his help, and tenderly taking him in their arms, carried him to his tent, where, in a short time, he breathed his last. Never, within the more than 79 years of history growing out of Shiloh camp meeting, ever occurred a more dramatic incident there than the passing of Uncle Dave Stripling.”

We only know where Eliza Hope Danes Cartwright came from because of the court records that indicate that Rev. Stripling adopted her and her sister. From what I have been able to learn, some folks still assemble every August for the Shiloh Camp meeting. We do not know for sure whether this is one of the reasons why the little church and community where Eliza and her son settled in the 1870s was named Shiloh. We do know, however, that other families (including one of David Stripling’s sons) from Carroll County, Georgia also journeyed west to live in the same area about the same time that Eliza and her eight children moved to Scott County. 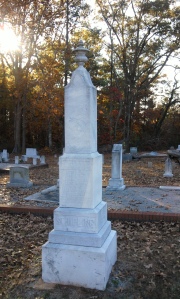 Although David Stripling is not my biological ancestor. He is a neighbor who seems to have lived a good life. And among the good things that he did in his life was to adopt an orphan girl whose parents had come to this country just a year or so before she was born. He also offered a good testimony in life and death. He is remembered by the community of people who are associated with Shiloh Methodist Camp Meeting near Carrollton, Georgia. But I hope that some of the folks in the Cartwright clan pass along the story of Uncle Dave. I would like to think that we might be able to offer hospitality to the orphan children of other families who come our way.–MGC

If you would like to receive these posts by email, you can follow in the right sidebar.

I am a member of the senior administrative team at the University of Indianapolis where I have served since 1996. I am married to Mary Wilder Cartwright. We are the parents of four children: Hannah, Erin, James, and Bethany. I currently live in Nashville, IN.
View all posts by mcartwright1957 →
This entry was posted in from East to West and tagged David Stripling, Eliza Hope Danes Cartwright. Bookmark the permalink.