In the absence of photographs, it is difficult to know much about our ancestors, the faceless members of whatever family tree we may be exploring. In the absence of names, it is even more difficult to locate our families in space and time. In such situations, we can know very little about their life and times. But where we have photographs, we often have stories as well as names. And where we have a basis for saying something about a person’s story, we have a chance of being able to say something about the life he or she lived.

In the case of the photograph above, five generations are grouped together (linked to Eliza Hope Dane Cartwright through her daughter Mary Frances Elizabeth Cartwright West) who lived in Gum Log, Arkansas (north of Russellville).

Somewhere there may be photographs of nineteenth century immigrants associated with my maternal ancestors – the Sullivan and Wooten clans. At this point, however, the name of the first immigrant in my extended family for whom we have both the name and a photograph is Eliza Hope Dane Cartwright (1823-1907). Coincidentally, we also have an obituary for this paternal ancestor, which can be found in an issue of the The Courier Democrat Newspaper published in Russellville, Arkansas.

Here is another photo of Eliza with another group of relatives. 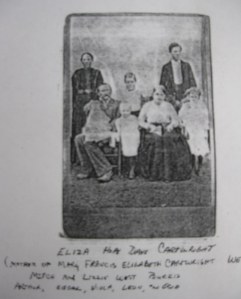 From these records, we can begin to reconstruct the basic outlines of her story. . . .
The same obituary that reports that she died on the afternoon of February 12, 1907 indicates that Eliza joined the Methodist Episcopal Church when she was eight years old (or in the year 1831). I found this interesting, because I had always assumed that the Cartwrights were Baptists going back several generations before my grandfather. That turns out not to be the case.  See the related story about David Stripling.

If you would like to receive these posts by email, you can follow in the right sidebar.

I am a member of the senior administrative team at the University of Indianapolis where I have served since 1996. I am married to Mary Wilder Cartwright. We are the parents of four children: Hannah, Erin, James, and Bethany. I currently live in Nashville, IN.
View all posts by mcartwright1957 →
This entry was posted in from East to West and tagged David Stripling, Eliza Hope Dane Cartwright, Mary Frances Elizabeth Cartwright West. Bookmark the permalink.